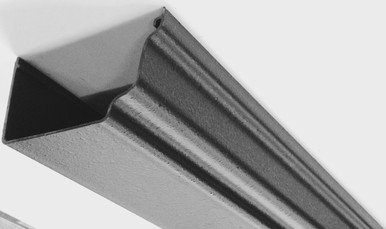 The Ogee profile is a very popular choice to replicate the guttering style used in the 19th and early part of the 20th centuries.

The ogee style of guttering actually has one of the highest flow capacities of all the domestic rainwater systems, with a running outlet available for higher than average rainfall.

We think this style of cast iron effect guttering looks second to none on houses built with a 'town house' style, and also houses with a strong facade which appreciates clean lines and symmetries.

Try our Ogee specific Sample Pack to see the cast iron effect products at your property.

All products sold from the Cast Iron Effect Company now have a 20 year colour replacement guarantee.

Any of our cast iron effect guttering sold in 4m lengths being delivered, incurs a larger courier charge of £35.

This product hasn't received any reviews yet. Be the first to review this product!

Write your own product review

All prices are in GBP.